Which network provides the strongest price signal for solar and batteries? 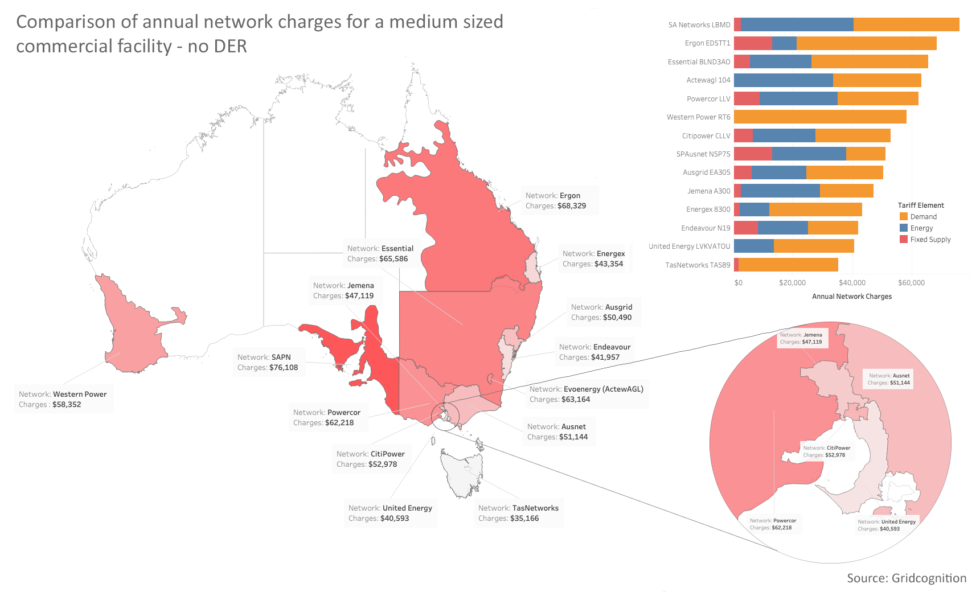 We simulated the same behind-the-meter commercial solar and battery project across the 14 distribution networks that make up the WEM and NEM. We found that there could be up to a 150% difference in the network tariff savings based on the very same investment. Some highlights:

There’s a lot of detail and no shortage of assumptions that went into the analysis so I highly recommend reading on.

By integrating distributed energy resources (DER) – solar, storage, EV chargers, controllable loads – close to energy loads, our homes and businesses, owners of these assets can unlock more commercial value than if the same assets as located further upstream in the energy system.

A good example of this is the way that DER can help reduce network charges, the fees levied by the owners of the poles and wires that deliver electricity to our doors. In Australia, these costs typically represent between 30% and 60% of the total electricity bill.

For commercial and industrial (C&I) customers, network charges are often split out in such a way that they can see not only how much of the bill is going towards these fees, but importantly which elements of the network tariff – fixed fees, energy charges or demand charges – are responsible for most of the cost. This in turn becomes a price signal that customers can start to respond to as a means of reducing the cost of the electricity they consume from the grid.

This much isn’t new, network tariffs have been around for a long while and savvy customers have been mitigating their exposure to them wherever possible, but with the increasing trend towards distributed energy, particularly highly steerable assets like battery storage or EV chargers, network tariffs are again in the spot light.

In Australia we have 16 distribution network service providers (DNSPs) that cover the electricity market and each network has a number of different tariffs. Which tariff a C&I customer might be allocated will depend on things like their location, connection type (high voltage or low), energy consumption (measured in kWh) and peak demand (measured in kVA).

The networks have an incredibly broad range of tariff designs that they use to determine how much a customer will pay each month. These tariffs can be bewilderingly complex to normal people, and frankly to those in the electricity sector too, but there are three common elements that will often appear in C&I network tariffs, even if some of these elements can be measured and charged for in very different ways:

*  there are a heap of alternative mechanisms that networks use to charge for demand
** can be month, rolling 12 months or ‘forever’

By way of example, here are a couple of graphics that describe a single network tariff, cryptically referred to as LVkVATOU, offered by United Energy in Victoria. There’s a bit going on and this doesn’t even constitute the complete set of tariff rules! I’m not picking on United especially as most of the networks have similarly funky arrangements.

The differences, and the complexity, in the way that networks calculate fees makes figuring out the potential cost savings through investment in distributed energy assets challenging, and yet with network charges representing such a significant chunk of the total cost stack for grid-consumed energy it’s a very important piece of the puzzle.

The challenge is magnified when you consider that increasingly DER assets are becoming steerable – that is, they respond to a control signal in a dynamic fashion either to maximise the value they capture or to remain compliant with the network connection agreement.

With all this in mind we thought it would be interesting to try and compare networks around the country with a view to answering the question: which network provides the strongest price signal for investment in solar and storage. So here goes.

To ensure a reasonably fair comparison for our analysis a 12-month load profile from a typical medium-sized business was used for the commercial calculations. For those who like the detail, our example site is low voltage, uses ~650 MWh per year with a seasonal max demand ranging from around 230 kVA in summer down to 130 kVA in winter, and operating hours of 8am to 5pm Monday to Friday.

The relevant network tariff was selected for each network operator using the latest 2020 rates and rules. For many of the networks there was only one applicable tariff. For those where there was a choice the least-cost tariff was selected. Where tariffs included an additional locational pricing component, for example distance from the CBD or the closest transformer, we’ve assumed urban locations.

Using the Gridcognition software, we started by calculating the network charges assuming that the load shape for the site remains unchanged i.e. no DER assets. This represents our baseline spend. We then simulate the performance of a 200kWp solar PV system (orientation 0° north, tilt 10°), a 232kWh / 2 hour (116kW) li-ion battery energy storage system (BESS) and then a combo of both solar and storage.

In terms of control modes, the solar doesn’t have any, it simply generates based on the irradiance for the respective postcode. This is in line with how the vast majority of solar systems operate today (but not for much longer) and the BESS is running solely to mitigate network charges, primarily demand peak lopping and, when co-located with solar, to maximise self-consumption. It’s important to note that we’re only assessing the cost savings associated with the network tariff. These assets would, of course, be capturing additional value, but the story gets way too complicated if we include all of that.

We’ve also deliberately excluded capex or opex for the new hardware for the same reason; we’re focussing on savings only. Finally, all savings are annualised but based on year 2 after installation to allow for a complete 12 month billing cycle. This caters for networks that charge for peak demand over a rolling 12-month rolling window.

First up, this graphic illustrates the expected annual spend on network charges for our example site as it is moved between different network operators. Remember that the load shape is identical in each case. The bar chart provides an additional breakdown of where costs are incurred and there’s a zoom on Melbourne as that’s quite a busy area with a few networks all coming together. All other things being equal, South Australian businesses will be looking pretty enviously at Tasmania with our simulated SA site paying over $40k a year more than the same site operating on TasNetworks.

Next, the same graphic but this time looking at the expected network charges after the addition of a behind-the-meter solar and battery storage system. We’ve simulated identical hardware at each site with the caveat that solar yield is calculated based on measured irradiance for the relevant postcode (so sunnier areas will have greater production) and the battery control strategy is responding to the price signal provided by the respective network tariff, for example if a network only charges for demand during a designated peak period the battery will only look to minimise grid demand during that same period.

Savings by network and battery workload

The final graphic brings together the annual savings relative to the baseline ‘no-DER’ scenario but also incorporates another facet of the battery storage equation, what we’re calling ‘battery workload’.

Like most things batteries have a limited lifespan; they wear out as you use them. Exactly how quickly this happens is still an ongoing debate – the dataset of real-world assets is still pretty small – but it certainly depends on battery chemistry and operating conditions, as well as how often and hard the battery is run.

With that in mind we’ve included the total energy in kWh that moves through our modelled battery system in each case to achieve the predicted network savings. Ideally we want our battery to generate greater savings, a larger rectangle in the tree map below, whilst having a lower energy throughput, represented by a lighter colour.

For grid connected customers, the wholesale price of energy is only one input to the cost stack that makes up the monthly electricity bill. Sitting between customers and the power stations, solar and wind farms that generate the energy they consume is a lot of expensive network infrastructure, most of it owned by private enterprise looking to turn a dollar and ensure their own survival during this period of huge transformation to global energy systems.

The fees levied by these network businesses are significant and represent a material chunk of a customer’s annual energy spend. Not only that, but as wholesale energy costs trend down over time network charges will likely represent an even larger chunk of the cost of grid-supplied energy than they do today.

That inevitably makes them a target for organisations looking to make their own investments in energy infrastructure through the deployment of distributed energy assets like solar and battery storage.

For the networks themselves, tariff design is a hugely challenging space. Providing the right price signals to encourage customers to invest in and operate DER assets in a way that is complimentary and supportive of the needs of the network is key to their continued survival.

Hopefully what this analysis goes some way to helping illustrate is that the interaction of tariff design, load shapes and DER assets is very far from a one-size-fits-all and that simulation and optimisation software like ours can help drive better commercial outcomes all round. Which network provides the strongest price signal for EV charging?

The transition to decarbonised and decentralised energy systems is occurring in lockstep with the growth in e-mobility. There’s a healthy debate underway in the energy sector around where battery energy storage assets should be located within electricity systems, in order to create the greatest possible value, both for their owners and for society more broadly.