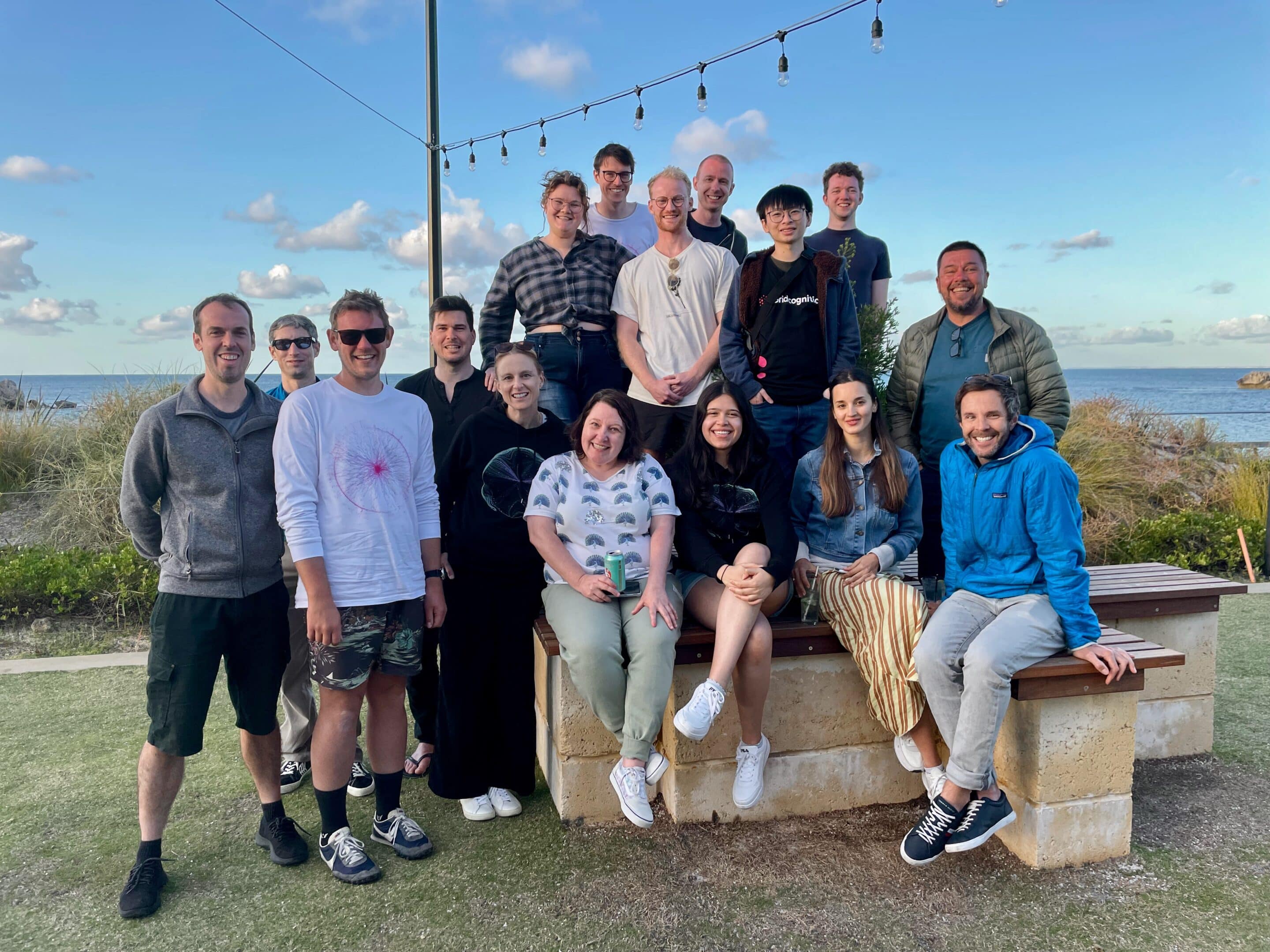 As an early-stage tech startup and a child of the Covid era, Gridcog is a fully remote business. We don’t have a permanent office, instead, at any given time we have employees in at least five cities (Perth, Sydney, Melbourne, Canberra and London) working from home or from a co-working space. So it’s really important that as a company we can get the whole team together for business planning and real time interaction.

In October this year we held our first full team retreat. Everyone in the team headed to Western Australia and met up at our hotel on a Sunday afternoon. For many of us it was the first time we had ever met our colleagues in real life, and for a few, it was our first time on the west coast! As everyone made their way to Fremantle, we convened at a bar called Jungle Bird for a drink and a chat. Once we had the whole team together we made our way over to the enormous shed that is Gage Road brewery for pizza and beers.

Monday morning was our planning day, but first things first, we needed coffee! We discovered that the cafe across the road from our hotel, Good Things, was one of the best in all of Freo. Without hesitation, the Melbourne crew indulged in a ‘magic’ whilst the Perth locals sipped on a long mac topped up. 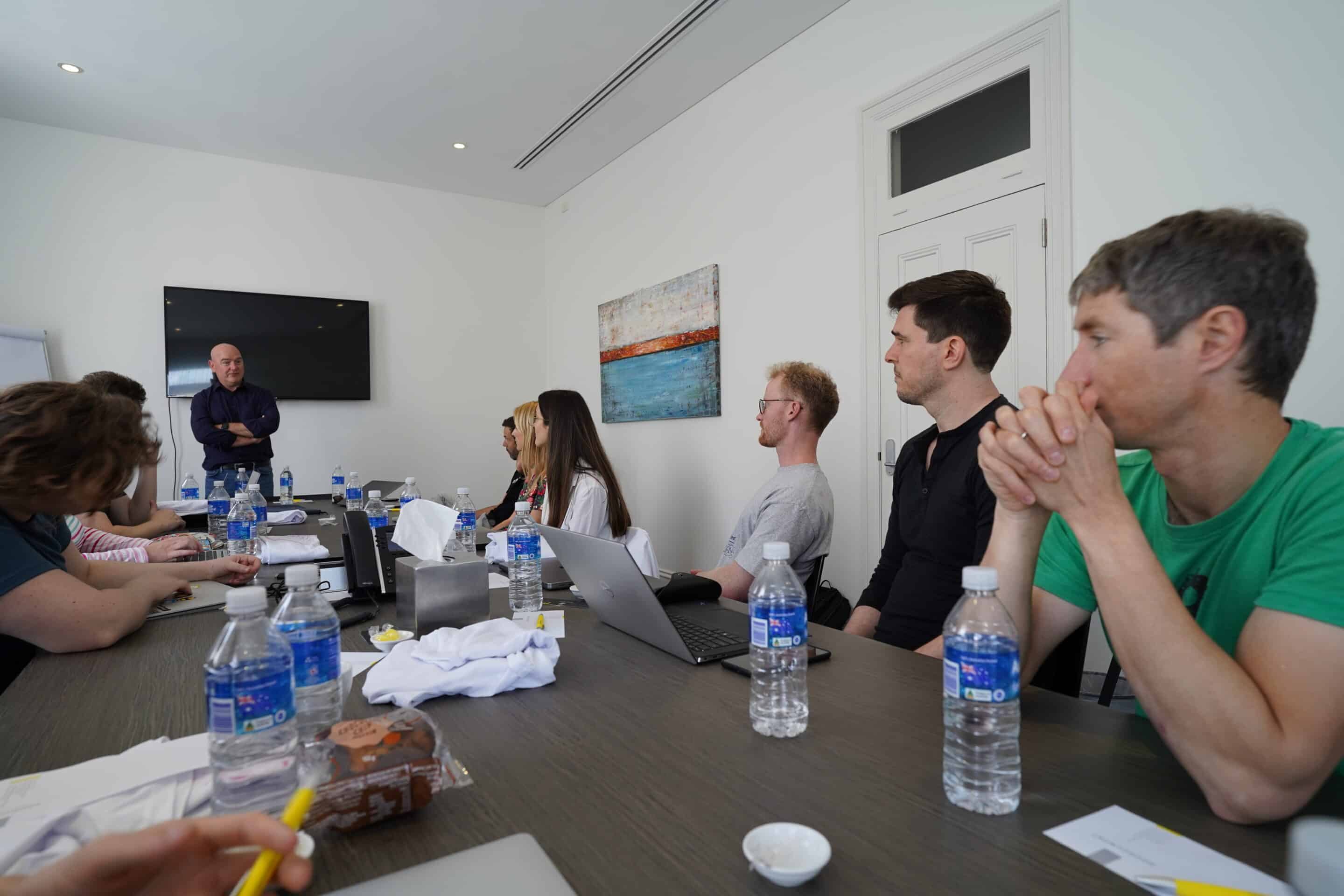 We then headed back to the hotel boardroom to start the business-aspect of the retreat. Sessions like these are fantastic – it’s a chance to get the whole team together, a chance for our co-founders to describe the vision and road map for the year ahead, and a chance to sit down in small groups and have frank and honest discussions about how we’re doing as a business and a team and where we want to go. It was refreshing and energising.

After spending the majority of the day in a boardroom it was time to stretch the legs. For our evening activity we were offered the choice of either a walking tour of historic Fremantle followed by cocktails and dinner at a restaurant, or an indoor climbing gym and pizzas. As it turned out, most developers are into climbing, so the bulk of the group booked Ubers and headed out to the bouldering centre.

But our three day retreat wasn’t all about business-planning and strategy. On Tuesday morning, the cold and wet weather turned into a gloriously sunny day. This was fortuitous as we had organised a charter boat to take us over to Rottnest Island. Anchoring in Little Parakeet Bay for lunch and a swim was just what the doctor ordered. We relaxed on the boat for a few hours, enjoying lunch and drinks, with music playing on the stereo, and watched a family of whales breaching in the distance. We couldn’t have asked for more.

In the early afternoon the charter boat dropped us off at the jetty on Rottnest Island. We then checked into our accommodation on Pinky’s Beach and had free time for more activity. This included riding bikes, exploring the island, and walking along the pathways in search of the cutest quokka on Rottnest for that elusive selfie.

But something that caught our attention when we were cruising closer to Rottnest was their wind turbine. Prior to arriving, we were already aware that Rottnest Island was a microgrid, but this gave us the chance to see it up close. And in retrospect, it was probably always part of Pete and Fabian’s plan to turn the Rottnest-part of the retreat into a learning experience. So what did we learn? The 600 kW wind turbine and 600 kW solar system is enough to cover most of the island’s load (the remainder is covered by a load-following diesel generator), and they have plans to go 100% renewable. Watch this space for a Gridcog Rottnest Island model!

Before our final dinner on Tuesday night, one of our colleagues hosted a rather unique trivia contest that tested how well we knew one another. It was a three part quiz where one of the challenges asked us to review screenshots of our Slack messages and decipher who sent the message. It was not as easy as it sounds, but it was a lot of fun.

With the retreat coming to an end it was time to head off in different directions. The WA locals stayed as a group and went into a co-working space in Perth to get started on some of the burgeoning ideas that had just germinated. Our international traveller John joined them as he was staying in town for another week. Some of the interstate travellers also stayed in Perth for a few extra nights to take advantage of the opportunity to work together with their colleagues in person. Whilst the rest of the travellers headed back home to see their families.

Working remotely is full of challenges which is why company retreats are so worthwhile. And whilst retreats can be expensive, they have a lot of payoffs. For us, it brought the team together in more ways than one. We formed closer friendships. We generated ideas. We had our voices heard. It boosted morale, and we had a lot of laughs. Hopefully we will make this an annual tradition. It was the one year anniversary of Gridcognition this month and we had our inaugural week-long company-wide retreat. This time it was virtual but we’re hoping that our next one will be in-person. A couple of weeks ago I posted some analysis looking at how much battery storage I would need to add to my existing solar system at home to be fully self-sufficient & 100% carbon free with respect to my electricity consumption.