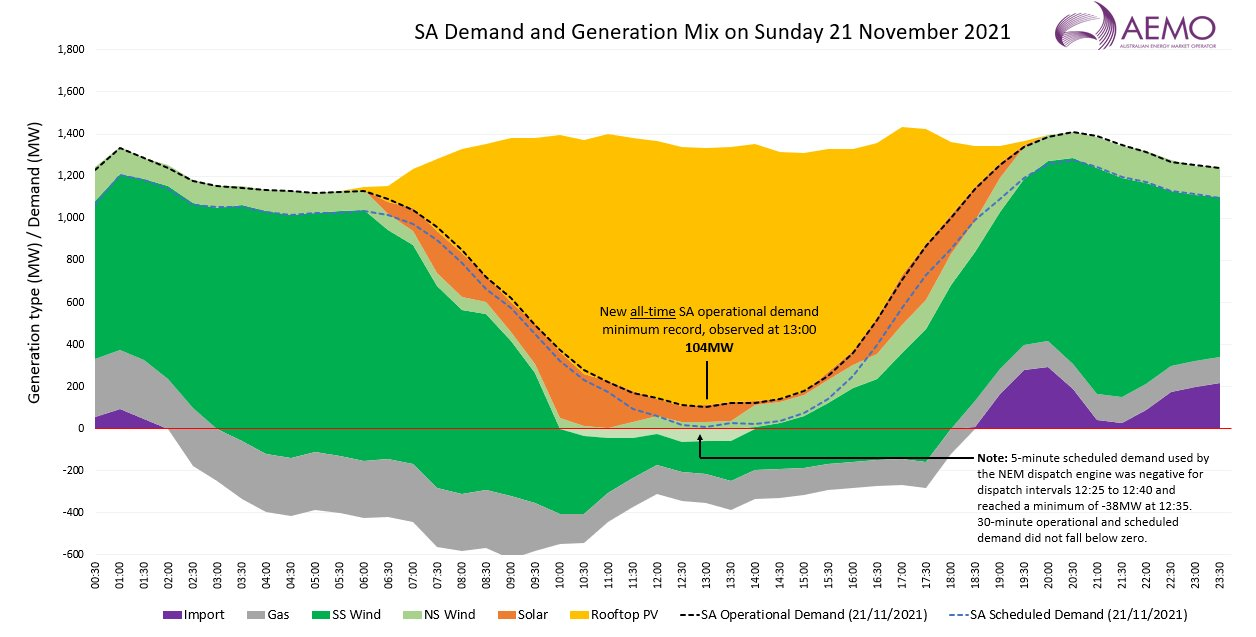 Only a few years ago debate was running hot over whether even relatively low levels of renewable energy in the world’s electricity grids was achievable, and back then “renewables” typically meant large utility-scale assets.

Back then few people would have seen this coming: Last week South Australia became the first gigawatt-scale grid in the world to reach zero operational demand, when the combined generation of rooftop and small-scale solar met all customer load requirements.

The Australian market is often seen as a petri dish of what’s possible with Distributed Energy Resources globally, as it has the highest levels of rooftop solar penetration in the world, so what’s happened here is worth a look for anyone interested in what could lie ahead for Australia and elsewhere.

Not only was this a first for South Australia, it is almost certainly the first time any major electricity system in the world has achieved this level of minimum demand (remember more roof-top solar output means less demand for energy from traditional generators, aka operational demand in grid speak).

And what was especially exciting for energy geeks is that South Australia even achieved a 5-minute dispatch interval with negative demand (-38MW at 12:35 on Sunday). That means that distributed solar from homes, businesses and small systems was generating enough energy to meet 100% of the States energy requirement AND have an additional 38MW to export to neighbouring networks.

As recently as a decade ago the overwhelming concern for system planners was ‘maximum demand’ not ‘minimum demand’ and people were still debating whether you could have even a 50% renewable energy mix in a power system.

A blip or a trend?

Not only is South Australia achieving trading intervals with 100% renewables, it is doing it consistently, with an “average share of wind and solar over October of 72 per cent”, and it is small-scale roof-top solar that is doing a lot of the heavy lifting.

What’s does this mean to the global energy transition?

This example in South Australia suggests that distributed energy assets are becoming the next major infrastructure asset class. It is also an asset class that can be mobilised rapidly, which is another key benefit when we are running against the climate change clock. Distributed energy resources can start delivering both financial and environmental benefits now.

As we described in the Gridcognition Manifesto: “In the long-run almost all energy will come from small, smart assets distributed throughout the built environment. These assets will convert renewable energy to electricity, store that electricity, and automatically manage electricity use in response to dynamic market signals.

These same assets will be aggregated to participate automatically in wholesale energy markets and local network flexibility markets, which will help to balance supply and demand and manage the reliability and stability of local electricity distribution networks.”